We are excited to announce some upcoming enhancements to Vision2’s integration with Ministry Platform. Based on customer feedback, we'll be aligning more with MP best practices and expanding the list of things that can be synced between the two systems.

We will release these changes in three waves:

Phase 1 is live and applies to all customers. Phases 2 and 3 will happen later and will be opt-in by customer. (After Phases 2 and 3 go live, we can work with you to activate the ones you want to use.) We will explain Phases 2 and 3 in future communications. For now, we will focus on explaining all the good stuff that's happening in Phase 1. We'll review how the integration works today and how it will work differently after the release of the changes.

Before going further, it will be helpful to clarify a few terms:

The first improvement in Phase 1 is the handling of reversals. A reversal is the cancellation of donation, typically because of a refund, a credit card chargeback, or insufficient funds in the bank account.

If you reverse a payment in V2, the integration changes the corresponding donation in MP so its amount is $0 and removes its donation distributions. This is not the MP best practice, so we are changing how this works.

On 3/26, Markus Stackhouse gave $200 online to the Essential Fund via credit card. A few days later, on 3/31, the credit card transaction was charged back. You can see this clearly in V2 in the payment status and financial details: 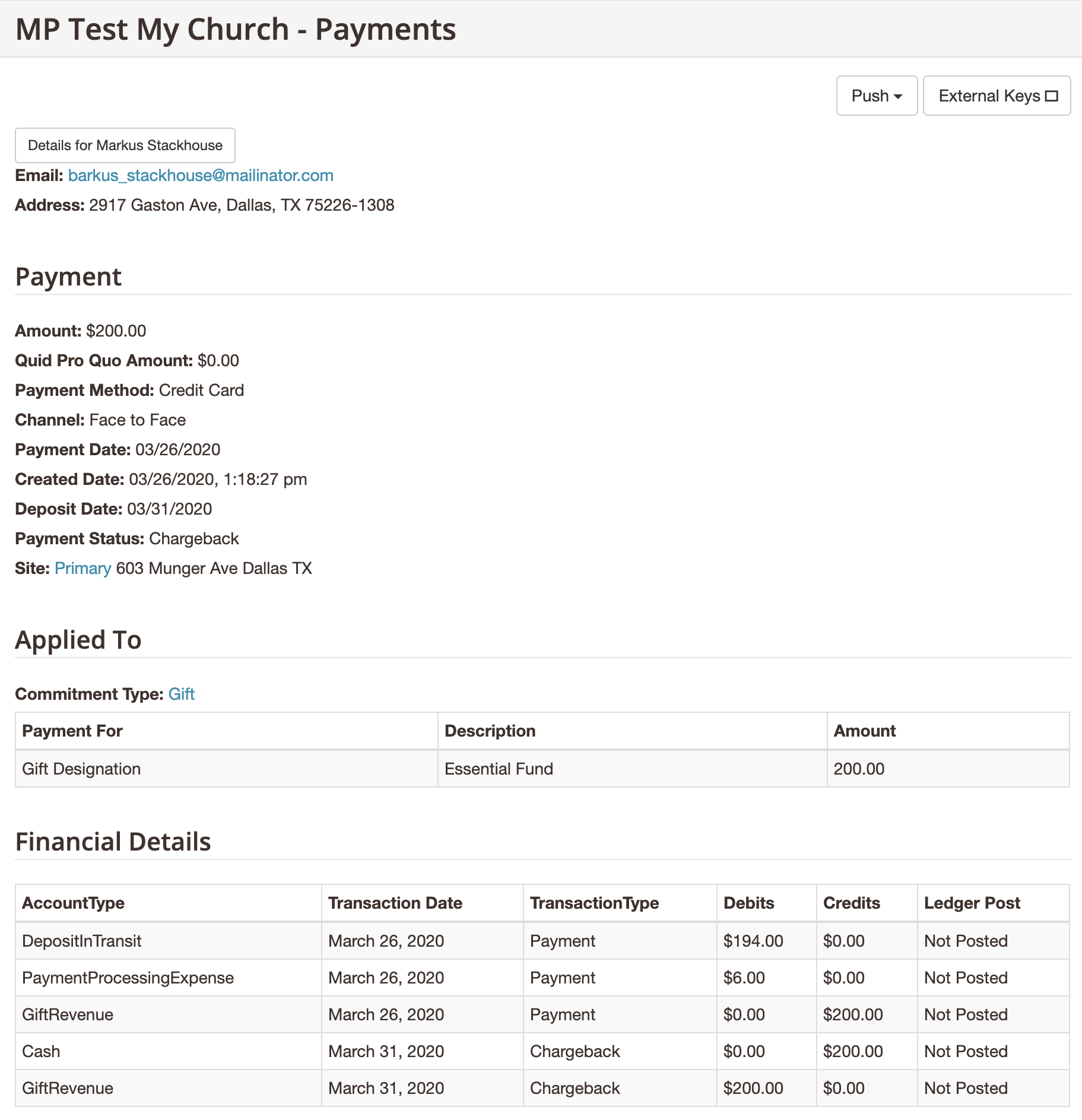 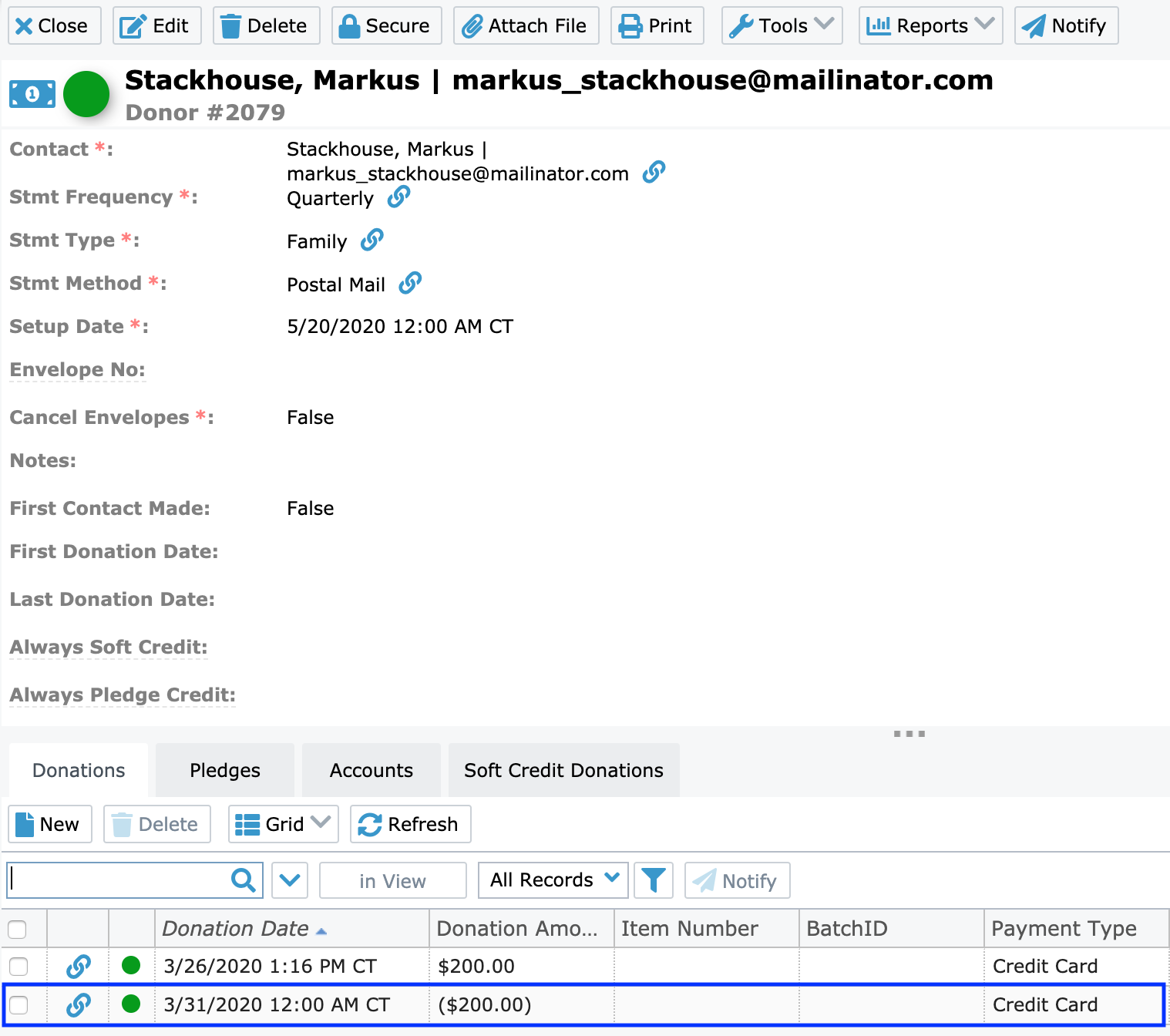 Something else important happens that you cannot see here. While these two donations clearly appear to be related, you cannot know for certain that the negative $200 donation reverses the first one just by looking here. If someone had entered a standalone negative $200 donation for Markus it would look the same. That's where the new V2 Adjustment Code field comes in to play.

If you click on the reversing donation to see the donation detail and scroll down to the bottom of the page, you will see a field for the V2 Adjustment Code. In that field is the Donation Id (9981) of the original $200 donation that this donation reverses. (This is also shown in the Third Party Note field.) 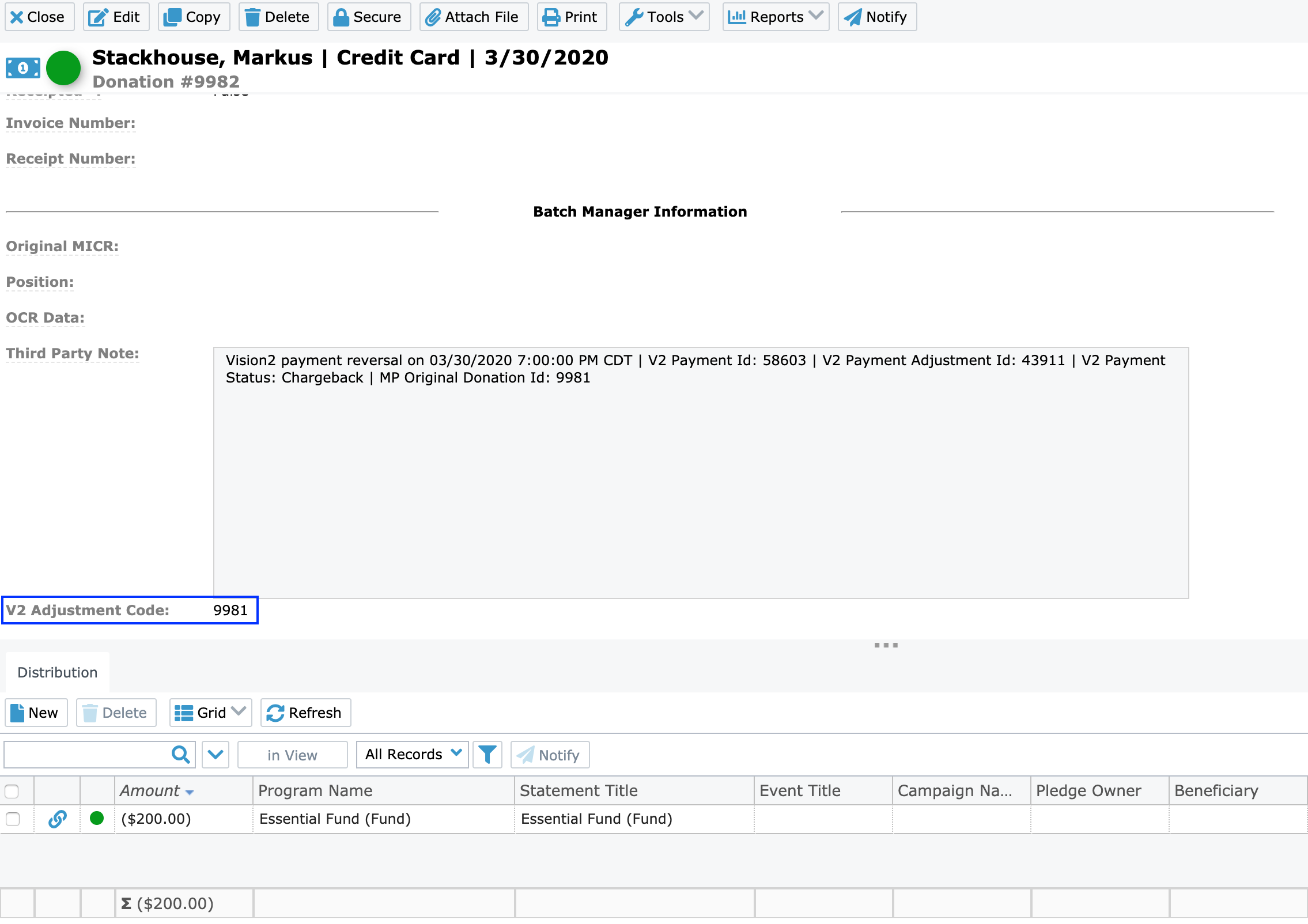 The V2 Adjustment Code is a critical piece of the reversal and reallocation enhancements. V2 will populate this field when it creates adjusting donations. It will also read this field when reversals are entered into MP for donations that originate in MP. We'll cover that next when we look at inbound reversals.

Any type of reversal in MP, whether it's a negative donation or a zero-dollar donation, is not pulled into V2 today. Without manual intervention, V2 and MP remain out of sync on these items.

For donations that originate in MP, you can enter a negative donation in MP and it will be polled into V2 and reverse the corresponding payment in V2, putting it into Voided status. You can also enter a partial reversal in MP which will reduce the payment in V2 by that amount (but will not void it).

On 4/15, a check for Berk Boxmon was scanned into MP. Berk accidentally used a check from an older account he's been meaning to close. On 4/22, the bank returned the check for insufficient funds. You want to reverse the donation in MP and have it reflected correctly in Berk's giving history in V2.

To correct the entry, you follow the MP process for handling NSF donations by copying the donation and its distributions and making the amounts negative. 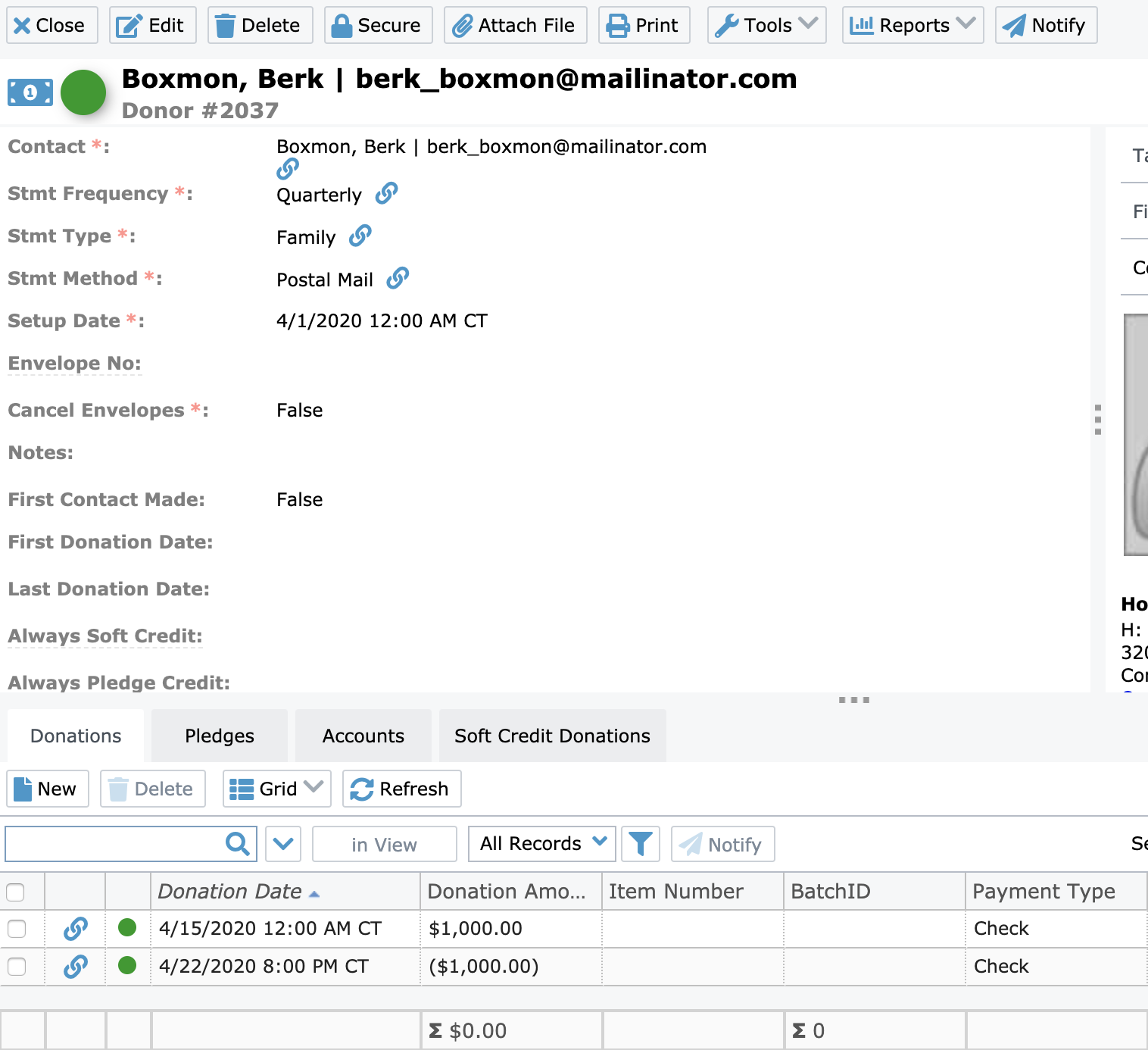 You've reversed the donation in MP, but it's not in V2 yet. Until a V2 Adjustment Code is added to the reversing donation, V2 cannot know which donation the negative donation is reversing, so it won't accept it.

Editing the reversing donation and entering the Donation Id for the original donation (7109) into the V2 Adjustment Code field will take care of this. 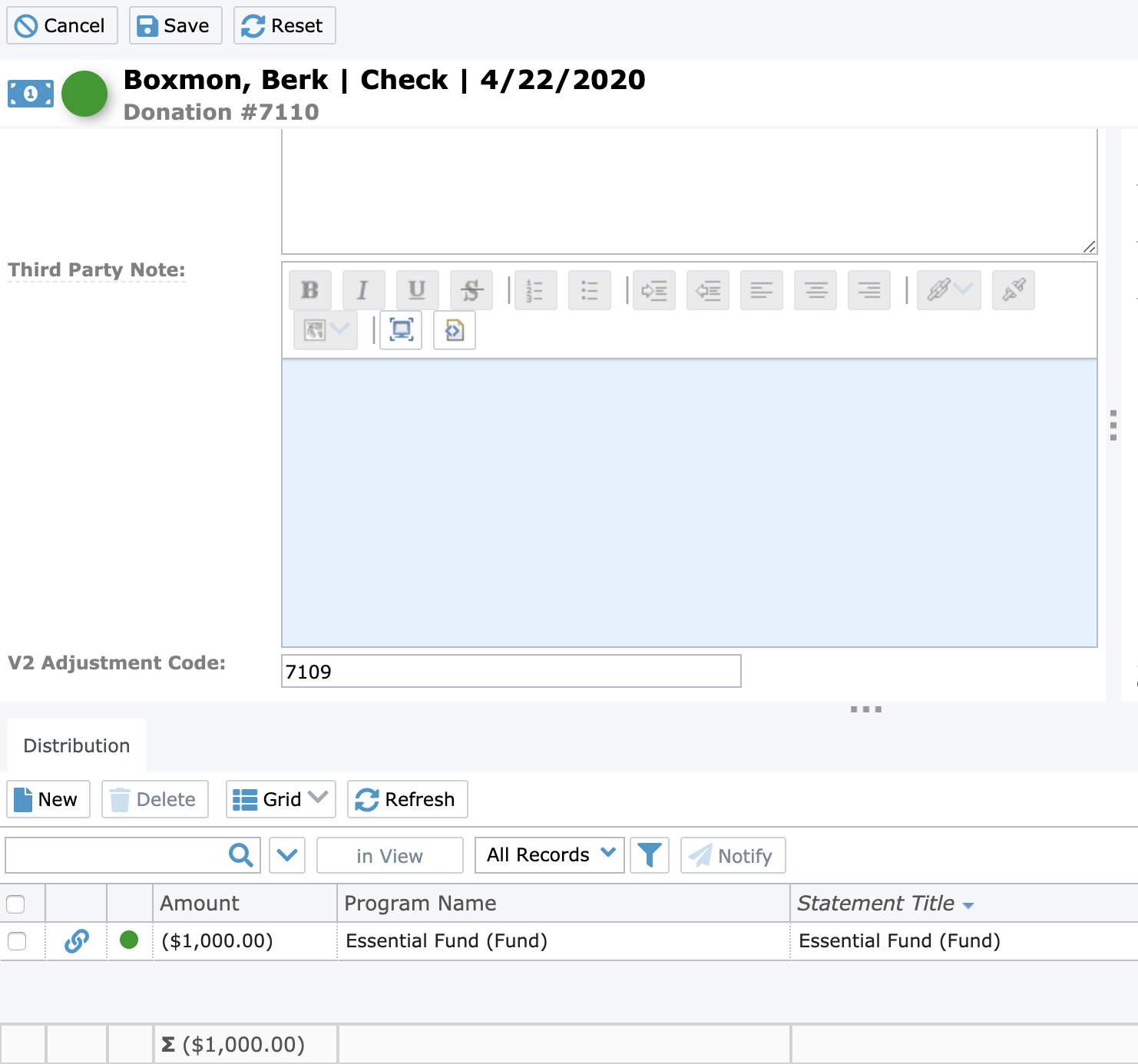 After saving the transaction in MP, V2 will pick up the reversing donation, apply it to the original donation, and change the status of the payment in V2 to Voided. Now this donation will not appear in Berk's giving history or his statement in V2. 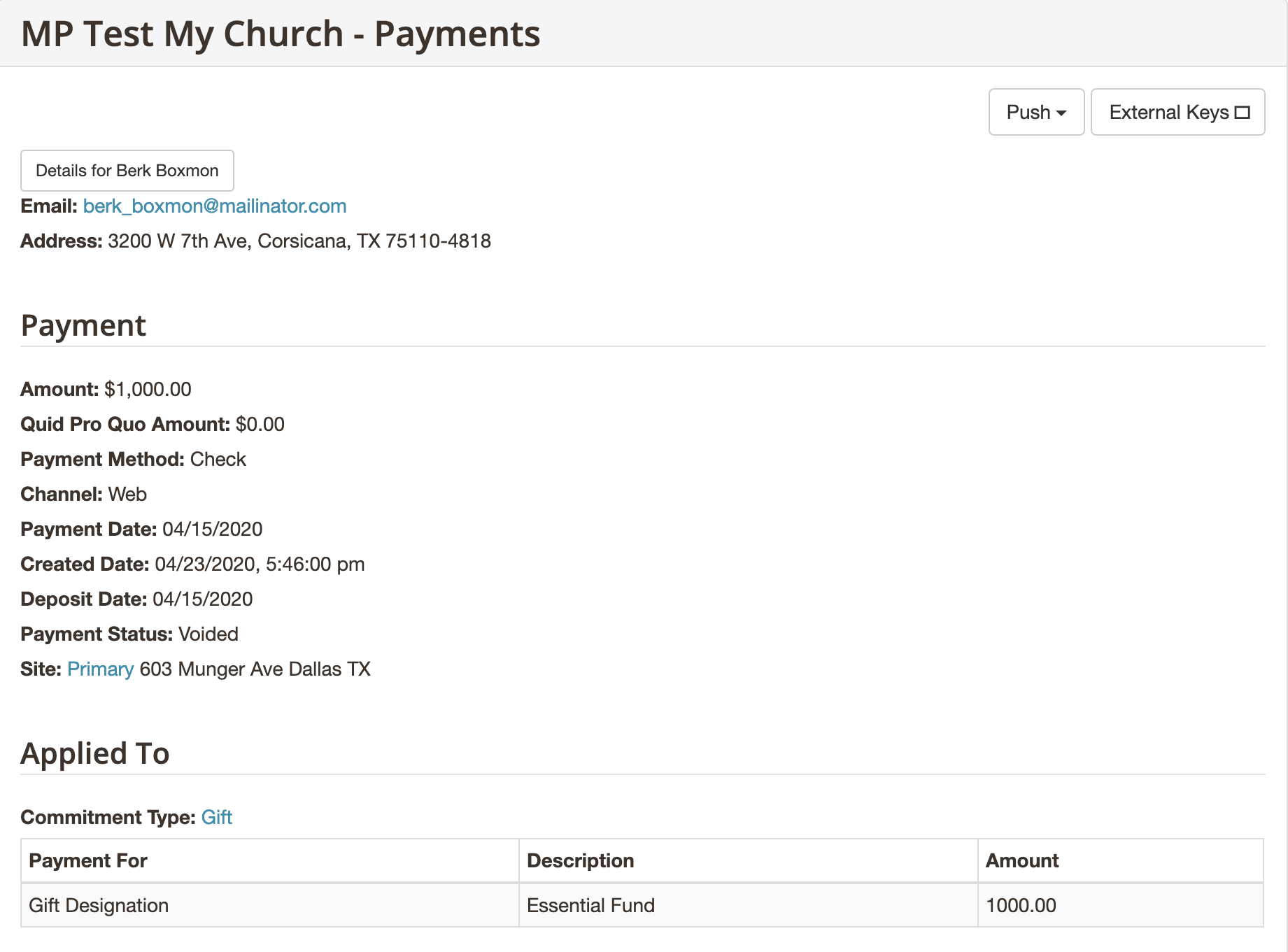 The process above also works with a partial return. A partial return will reduce the payment amount in V2 by the amount of the reversal but will not put it in a voided status.

The second improvement in Phase 1 is around reallocations. A reallocation is a change to the designations on a gift. For example, suppose Aliyah gave $100 to Tithe. Later, she calls the church and asks you to change it. She intended to split it 50/50 between Tithe and the Building Fund. You edit the payment and make the change. This change is a reallocation.

When you reallocate a payment in V2, it is reflected in MP by overwriting the original payment with the updated payment. This can cause issues with reconciliation and reporting. It's also not the best practice.

When a payment is reallocated in V2, a separate, adjusting donation will be created in MP. It will be a $0 donation with negative and positive distributions reflecting the designation shifts made to the payment.

Let's see what the changes to Aliyah's $100 donation will look like in MP. Recall it was originally to Tithe, then it was edited and split between Tithe and the Building Fund. 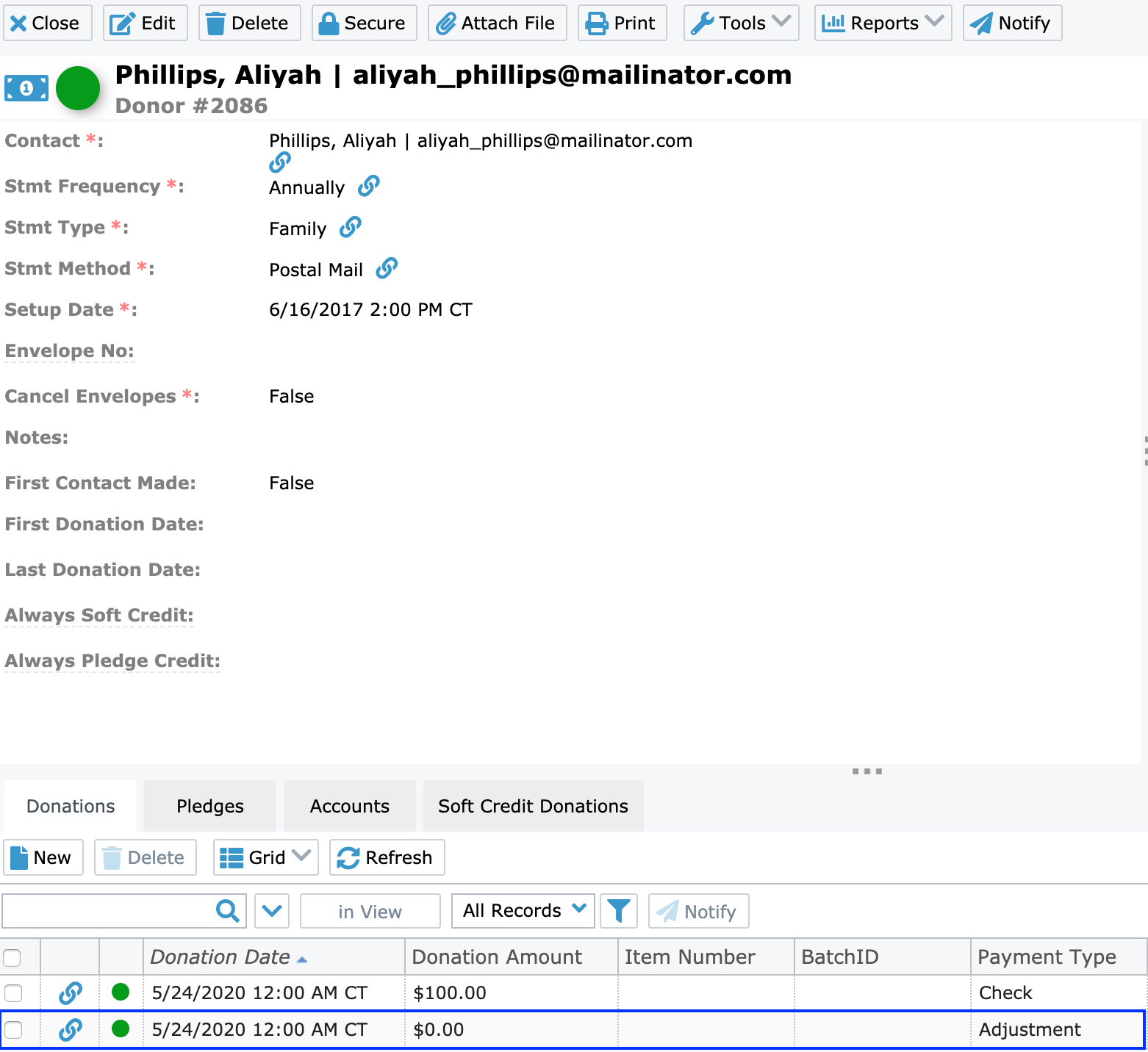 If you click on the reallocation donation to view the details, you can see the designation shift in the donation's distributions. 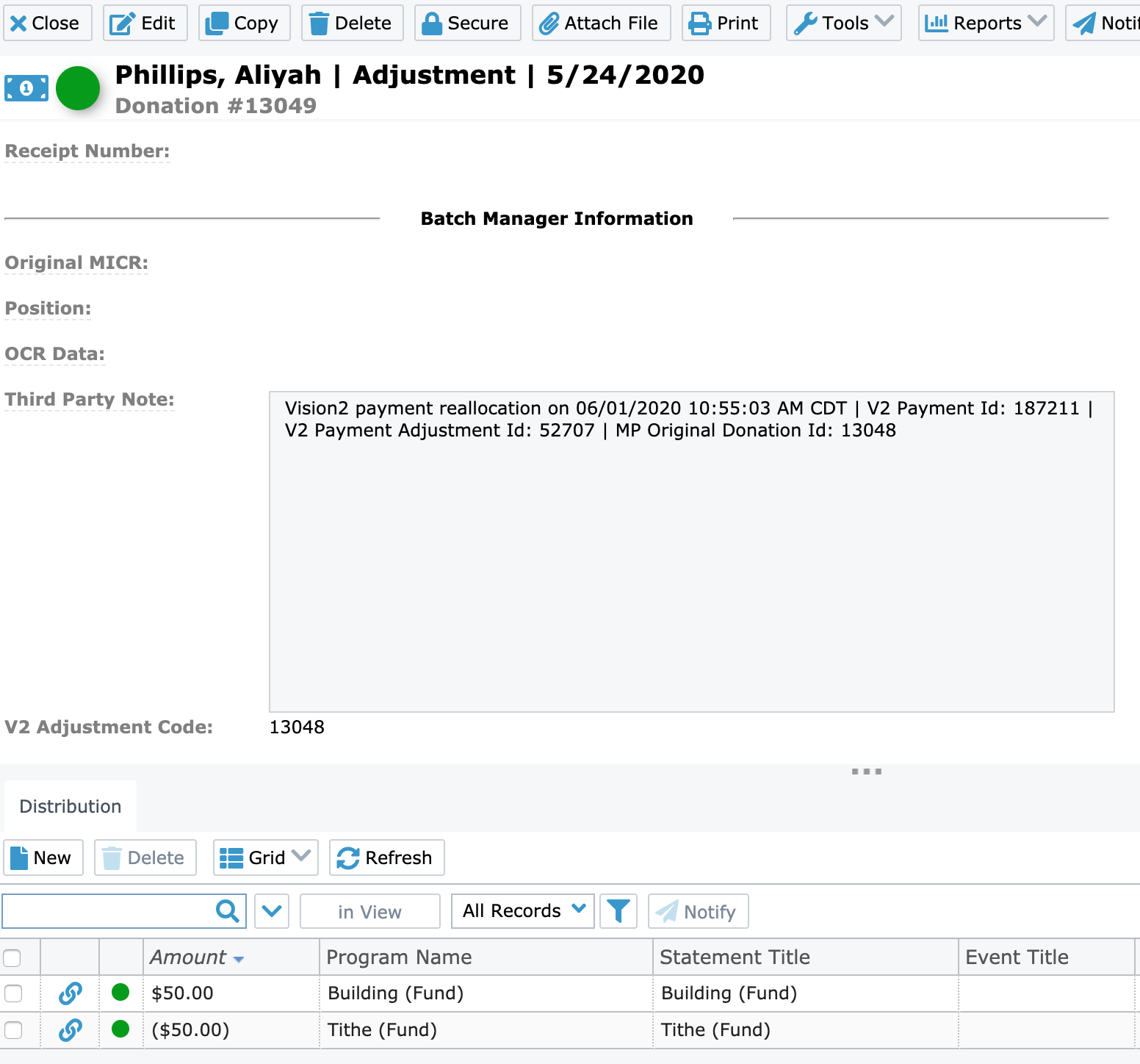 You can see that $50 was moved from Tithe (negative amount) to the Building Fund (positive amount). As with the reversals, the reallocation donation has the Donation Id of the donation it's adjusting in the V2 Adjustment Code field. There is also some additional information captured in the Third Party Note field.

Reallocations will work the other direction too. We'll cover that next.

The integration does not poll adjusting donations of any kind from MP today. If a donation is changed in MP, the corresponding payment in V2 is destroyed and recreated to reflect the current state of the donation.

For donations that originate in MP, you can enter a reallocation donation and the integration will make the corresponding adjustment in V2. It follows the same pattern as reallocation donations created by V2. You will create a $0 donation with positive and negative distributions that net to zero and enter the Donation Id of the donation you are reallocating into the V2 Adjustment Code field. When the integration picks it up, it will make the corresponding designation changes to the payment in V2.

The final improvement in Phase 1 deals with anonymous giving. There are two anonymous gift scenarios to consider:

The donation in MP is attributed to the “Unassigned Contact” donor. This can interfere with other processes in MP built around that default contact.

The donation will now be from the Anonymous Donor (Vision2) donor. If that contact/donor does not exist in MP, V2 will create it.

If you want to change how that name displays, you can change the nickname on the contact, which will alter the display name. V2 won't overwrite the nickname field if this contact is ever update. 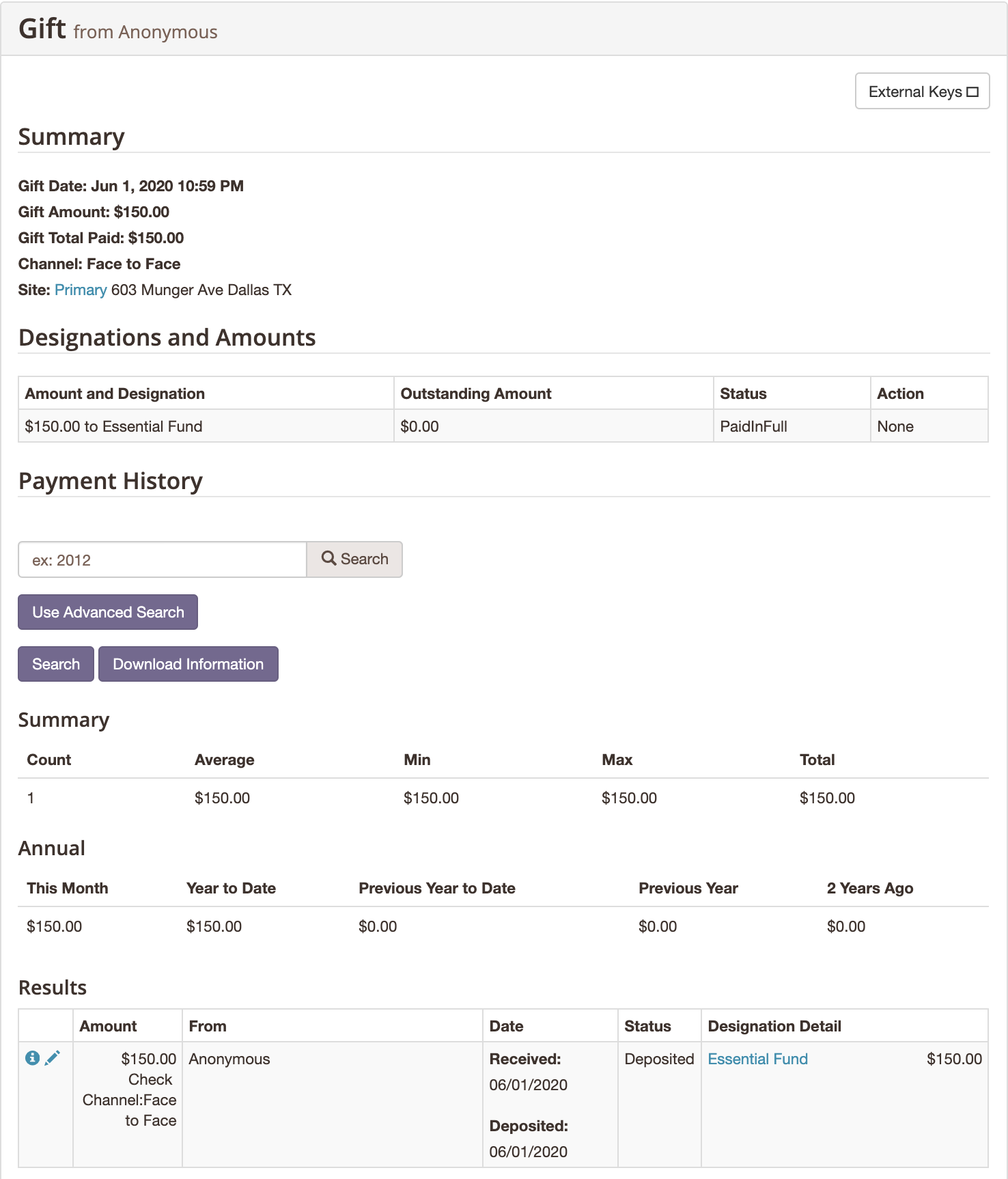 Here's how the donation looks in MP: 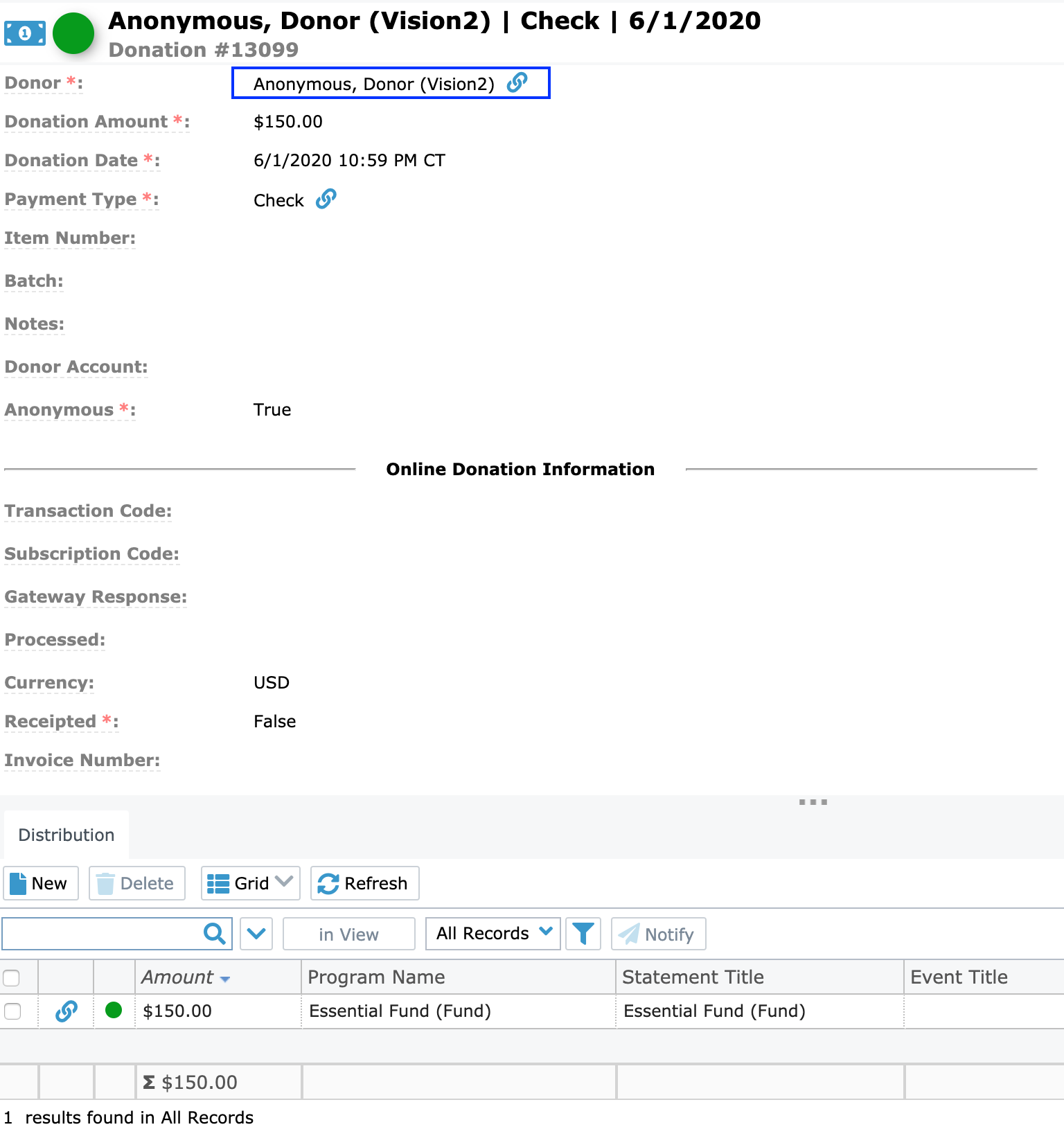 Today, there is no way to enter a donation in MP that will create an anonymously-funded gift in V2. While this may be infrequent, it should mirror what happens outbound.

Any donation from the Anonymous Donor (Vision2) donor in MP will create an anonymous gift and payment in V2.

The anonymous flag on the donation that is created in MP is set to False. (It should be True.)

The anonymous flag on the donation will be set to True.

No change. This will continue to work as it does today.

We'll let you know when we get closer to releasing Phase 1. In the meantime, please reach out to Vision2 support with any questions you may have.

Did this answer your question?